Asbjørn first printed several man hole covers with children, and then later joined designer Petri Henriksson (BLANK BLANK) to print silkscreen for adults. Both of the printing sessions used tote bags as the end destination & the audience got them free of charge! The prints literally walked away by people of all ages, and it was a lot of fun!

The legendary Jimi Tenor also played the good vibes while we printed! See the attached video.

Many thanks to Emil Nikolaisen & Martin Sørhaug for inviting us! Let´s do it again! 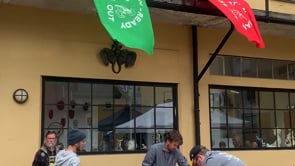